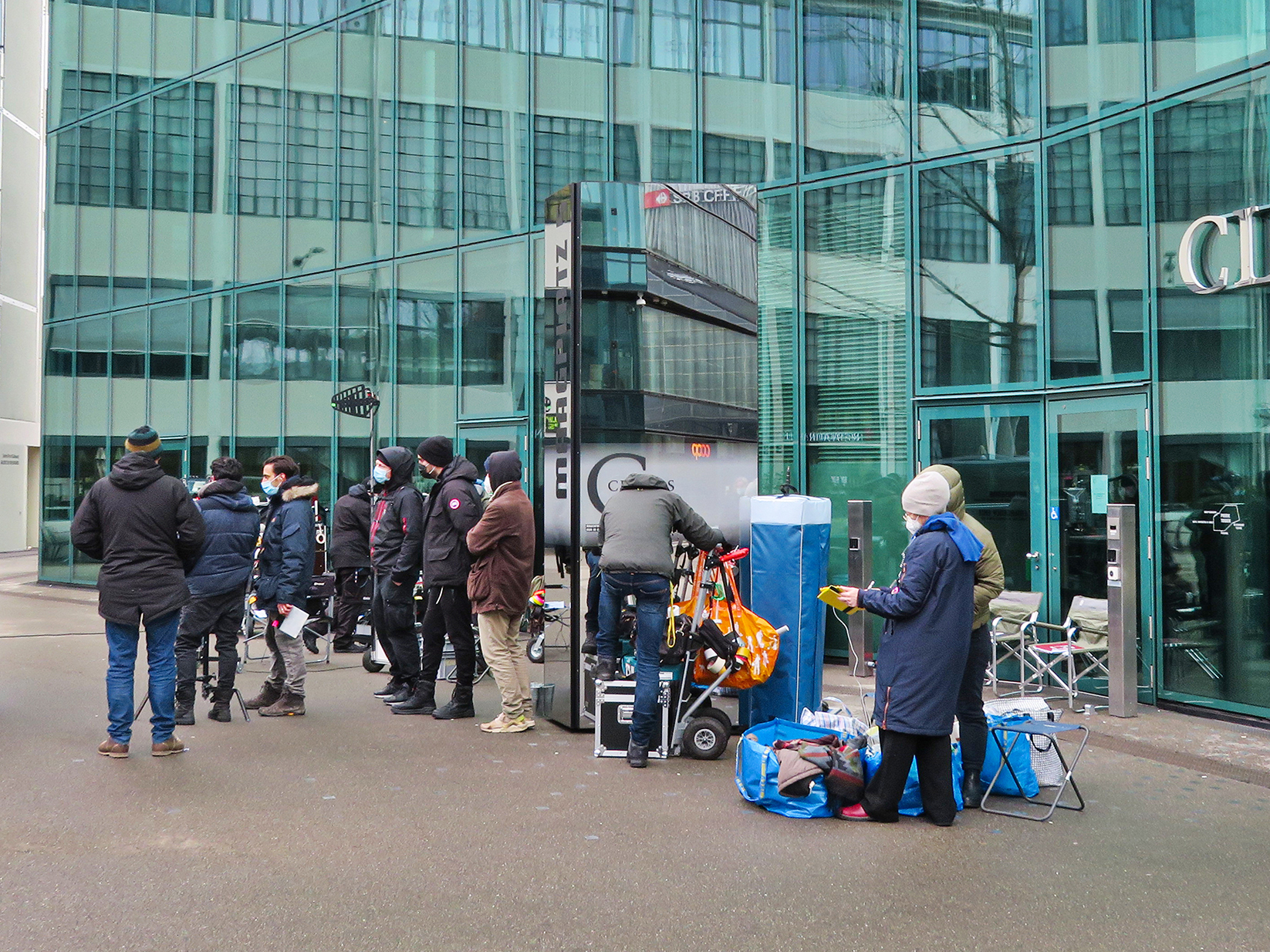 A black Mercedes is parked on the Prime Tower Areal. A crowd of masked people, around 20 of them, are standing around the car. It is so quiet you could hear a pin drop. Suddenly someone gesticulates wildly in our direction and gestures to us to stay back. Oops, have we wandered right into the middle of the filming of a new episode of the police drama “Tatort”? Sorry! Will they have to film the scene all over again because of us? We make our apologies and tiptoe round the Prime Tower. There we run into the cheerful figure of Alexis Lieber, Unit Manager and Location Scout for this production. He gives us an idea of what goes on behind the scenes and talks about the challenges of filming in times like these. Why was the Prime Tower chosen as the location? Because the Tower expresses something strong and powerful. And the setting fits the story perfectly. They are filming on the Prime Tower Areal, in the foyer, at the security gate and on the 32nd floor in the offices of Swiss Prime Site.

The repurposing of Rivington & Sons
The conditions for filming are good, despite the coronavirus. Because of the requirement to work from home, the Prime Tower is practically empty – and however painful the closure of the food service businesses may be, it’s a stroke of luck for filming. The premises at Rivington & Sons have been quickly repurposed as an office, and make-up and wardrobe sections. Lieber relates that the actors and extras are tested for coronavirus every morning before filming using a rapid antigen test. The time spent without a nose and mouth covering is reduced to a minimum. All other members of the crew wear a mask at all times.

The masks come off for lunch
We walk round the corner towards the Maag Halle. Alexis Lieber shows us where the crew eats together. The smell of food hangs in the air, it goes without saying that Rémy and his team prepare lunch in the food truck fresh every day. That’s where everyone likes to sit and eat together. The bench and table sets in the hall are arranged at a suitable distance and each is set for four people, with plexiglass dividers in the middle of the table for extra protection. High-performance UVC air purifiers are also deployed. “Lunch time is the only time of the day when you see your counterpart without a mask,” Lieber says with a grin, “Sometimes it’s the first time I get to see what someone actually looks like, because we often have new people on the set.”

Eight to nine hours of filming for six minutes of screen time
When we are lounging comfortably on the sofa on a Sunday evening watching “Tatort”, we sometimes forget how much work goes into it. They film for 22 days for a single episode, with a crew of around 50. And the days are long. Lieber tells us he has been there since 5.30 am. On average there are eight to nine hours of filming every day – plus a few hours more for setting up and dismantling the set. They will be filming here at the Prime Tower for three days. On TV, that’s equivalent to around 15 to 20 minutes of screen time. We are excited and are already looking forward to watching the “Tatort” officers Carol Schuler and Anna Pieri Zuercher fighting for law and order once again.

The episode of “Tatort” filmed in and around the Prime Tower is expected to be broadcast on SRF 1 in 2022. The previous two episodes of the Zurich “Tatort” can be downloaded from Play Suisse free of charge:
https://www.playsuisse.ch/landing